Modern operating systems would not be possible without the ability of a CPU to execute code at different privilege levels. This feature became available for mainstream PCs in the early eighties, when Intel introduced its 80286 and 80386 CPUs, and was readily employed by operating systems like Windows 3.11 and, of course, Linux, which Linus Torvalds once called “a project to teach me about the 386”.

When an 80286 or 80386 CPU (and all later models) is starting up, it is initially operating in what is called real mode, and behaves like the earlier 8086 which is the CPU used by the famous IBM PC XT. To enjoy the benefits of protected mode, the operating system has to initialize a few system tables and can then switch to protected mode. It is also possible, though a bit harder, to switch back to real mode – and some operating systems actually do this in order to utilize functions of the legacy BIOS which is designed to be called from real mode.

One of the features that the protected mode offers is virtual memory and paging, a technology that we have already discussed in a previous post. In addition, and maybe even more important, the protected mode allows code to be execute in one of four privilege levels that are traditionally called rings.

At any point in time, the CPU executes code at one of four ring (ring 0 to ring 3). The current ring determines which instructions are allowed and which instructions are forbidden, with ring 0 – sometimes called kernel mode or supervisor mode – being the most privileged level, and ring 3 – typically called user mode – being the lowest privilege level.

Some instructions can only be executed in ring 0. Examples are the instructions STI and CLI that start and stop interrupt processing (and potentially bring everything to a grinded halt as modern operating systems are interrupt driven, as we have seen in a previous post) or the command to reload the register CR3 which contains the base address of a page table directory and therefore the ability to load a new set of page tables. It is also possible to restrict the access to hardware using I/O ports to certain rings, so that code executing in user mode can, for instance, not directly access the hard drive or other devices.

Technically, the current ring is determined by the content of a special register called the code segment register (CS) – most likely an old friend of yours if you have ever written assembly code for the 8086, we get back to this point further below. As so often in the x86 architecture, this is an indirect mechanism. The CS contains a pointer into a table called the global descriptor table (GDT) which again holds the actual descriptions of the segments. Part of each entry is a two-bit field which specifies the ring. Thus if the CS points, say, at the third entry in the GDT and those two-bits in this entry contain 0b11, the CPU executes instructions at ring 3.

Interrupts can not only be used to switch from user mode to kernel mode, but also for the way back. In fact, whenever the CPU returns from an interrupt service handler, it will return to the ring at which the execution was interrupted, using the stack to bring back the CPU into its original state. In order to move from ring 0 to ring 3, we can therefore prepare a stack that looks like being the stack arranged by the CPU if an interrupt occurs, and then execute the IRET instruction to simulate returning from an interrupt service handler.

Matters get a bit more complicated by the fact that an interrupt service handler can in turn be interrupted by another interrupt, and that an operating system might want to implement kernel level threads which run outside of an interrupt context quite similar to a thread in user mode. To differentiate between those different situations, ctOS uses the concept of an execution level which is a software-maintained number describing the current context, as visualized below. 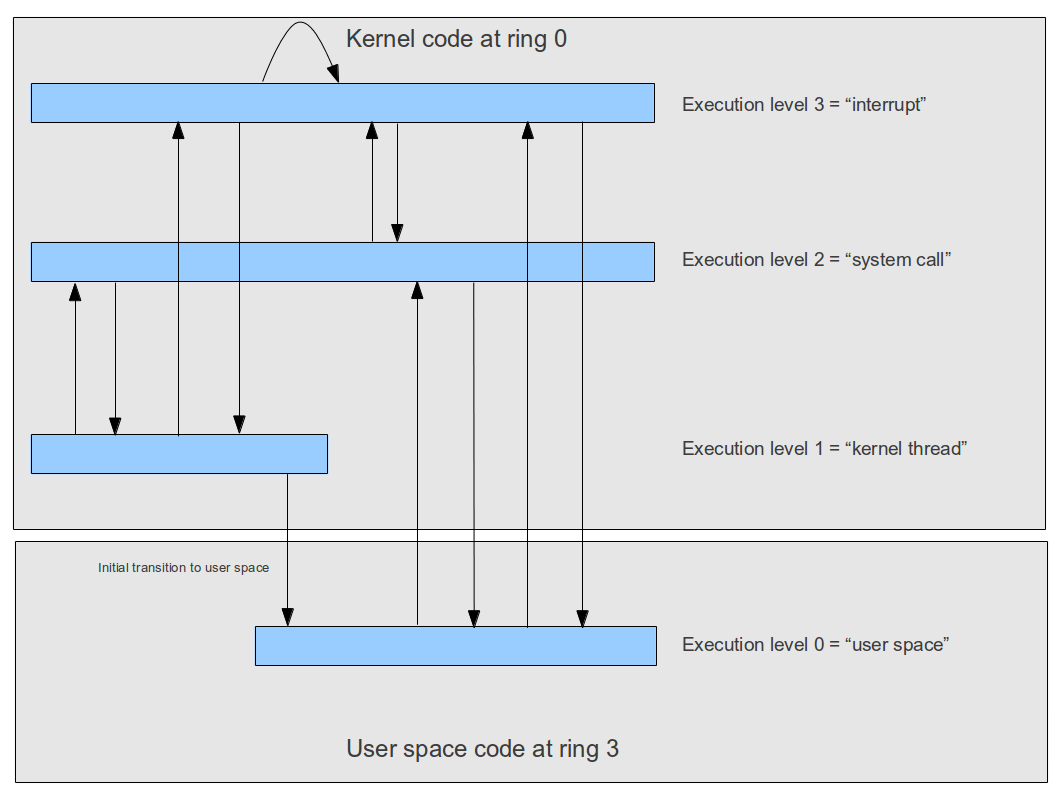 Another major change that the protected mode introduced into the x86 architecture was a more complex, but also more flexible memory model. To understand this, let us see how the older 8086 CPU handled memory (which is the mechanism that all modern Intel CPUs still use when being in real mode).

The 8086 was a 16-bit CPU, meaning that its registers were 16 bits wide. Therefore, a command like “put 0x10 into the memory location referenced by register AX” could only address 216=65536 different memory locations. To be able to address more memory, the Intel engineers therefore came up with a trick. When memory was accessed, the content of two registers was used. In the example above, this would be AX (16 bits) and the code segment register CS, which has 16 bits as well. To determine the actual memory location, the content of the CS register was shifted left by four bits and then added to the content of AX. Thus, if, for instance, AX contained 0x200 and CS contained 0x100, the address would be

This addressing mode is sometimes called segmentation because we can think of it as dividing the memory space into (overlapping) segments of 64 kByte and the CS register as selecting one segment.

Using segmentation, the 8086 CPU could address a bit more than 1 MB of memory and thus work around the limitations of a 16 bit CPU. With a 32 bit CPU, this is not really needed any more, but the 80386 nevertheless expanded on this idea and came up with a bit more complicated model.

In fact, in protected mode, there are three different types of addresses which can be used to describe the location of a specific byte in memory.

A program running in user mode usually only sees the offset – this is what appears for instance if you dump the value of a pointer in a user mode C program. The segment selector is set by the operating system and usually not changed by a user mode program. So from the programs point of view, memory is entirely described by a 32 bit address and hence appears as a 4 GB virtual address space.

When accessing memory, the CPU uses the global descriptor table to convert this logical address into a linear address which is simply a 32 bit value. This is similar to real mode where the segment and offset are combined into a linear 20 bit wide address, with the difference that the base address of the segment is not directly taken from the CS register but the CS register only serves as pointer into the GDT that holds the actual base address.

Logical and linear address are still virtual addresses. To convert the linear address into a physical address, the CPU finally uses a page table directory and a page table as explained in one of my last posts. When the CPU has first been brought into protected mode, paging is still disabled, so this final translation step is skipped and linear and physical address are the same. Note, however, that the translation between logical and linear address cannot be turned off and is always active. So setting up this translation mechanism and in particular the GDT is one of the basis initialization step which needs to be done when switching to protected mode.

Recall from my post on multi-tasking that a task switch essentially comes down to storing the content of all registers in a safe place and restoring them later. In the approach presented in my post, this is done by manually placing the registers on a stack. However, the x86 protected mode offers an alternative – the task state segment (TSS). This is an area of memory managed by the CPU that fully describes the state of a task. An operating system can initiate a task switch, and the CPU will do all the work to reload the CPU state from the TSS.

However, this mechanism is rarely used. It has a reputation of being slower than software task switching (though I have never seen any benchmarks on this), it introduces a lot of dependencies to the CPU and I am not aware of any modern operating system using this mechanism (Linux apparently used it in early versions of the kernel). Still, at least one TSS needs to be present in protected mode even if that mechanism is not used, as the TSS is also used to store some registers when an interrupt is raised while executing in ring 3 (see the corresponding section of the ctOS documentation for more details).

Having followed me the long and dusty road down to an understanding of the protected mode, this one will shock you: protected mode is legacy.

In fact, the protected mode as we have discussed it is a 32 bit operating mode. Since a few years, however, almost every PC you can buy is equipped with a 64 bit CPU based on the x86-64 architecture. This architecture is fully backwards compatible, i.e. you can still run a protected mode operating system on such a PC. However, this does not allow you to address more than 4 GB of memory, as pointers are limited to 32 bit.

In long mode, the CPU uses 64 bit registers and is able to use 48 bit addressing, which is good enough for 256 TB of RAM.

Fortunately, if you understand the protected mode, getting used to long mode is not too difficult. The basis concepts of the various tables that we have discussed (page tables, the IDT and the GDT) remain unchanged, but of course the layout of these tables changes to accommodate for the additional address bits. The register set, however, changes considerably. The general purpose registers are extended to 64 bits and are renamed (RAX instead of EAX etc.). In addition, a few new registers become available. There are eight additional integer registers (R8 – R15) – which are typically used to pass arguments to subroutines instead of using the stack for this purpose – and eight more SSE registers.

Apart from that, long mode is just another mode of the x86 CPU family. And this is not the end of the story – there is unreal mode, there is virtual 8086 mode, there is the system management mode and there are new modes (“VMX root mode”) that support virtualization. If you want to learn more, I recommend the excellent OSDev Wiki – maybe the most valuable single OSDev site out there – and of course the Intel Software Developer manuals. Good luck!